Well I am pleased to say that Pete has finished stripping the underside of Sundog and there have been no horrible surprises. In other words the fibreglass is solid with absolutely no voids nor delamination. In the words of Pete…….. ” this boat is built like a brick s***house”……..whatever than means 🙂 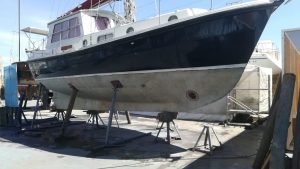 We had been trying to sort out dates with our good friend Pete who wanted to join us for the crossing to Barcelona.

As it turns out we couldn’t pull one together, so Sara headed off to London, and on Monday I picked Pete up at the airport. Then we headed back to Port de Pollenca, had a meal, sorted out additional food for the trip then out to the boat to cast off the lines at 1430.

Sundog had been fully prepared in advance, and as you can see the crew was totally focused and on high alert…….

The weather has been a bit peculiar of late and in the following photo (looking down the north coast towards Soller) you can clearly see the unusual weather currently being enjoyed in Mallorca. 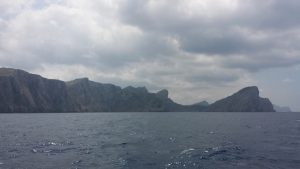 The sea was a bit sloppy for the duration, and at times we had swell coming from different directions. We tried setting all sail, then gave that up and reverted to motor-sailing with only the mainsail up. We had the joy of Dolphin on and off during the day and also at night – i don’t know what type they were but it was lovely when they appeared.

Commercial shipping was busy in spells and we had the largest cruise ship in the world, Symphony of the Seas, cross our stern at night all lit up……..jeez but its bright……….and BIG!

How did you know it was the Symphony of the Seas I hear you ask…….well that’s all down to AIS a piece of kit fitted to Sundog that displays all sorts of info on the chartplotter including ships name destination etc. I can tell you its destination was Marseilles 🙂

Pete was off watch and sleeping as this Leviathan slid past our stern, and, as he has been fighting some kind of bug for a week or so, and I left him sleeping. I was certain that if I woke him up saying “Pete you need to see this ship”, there may well have been some colourful South African language coming my way.

I fully understand that Sundog is a modest wee boat, but you don’t half feel “microscopic” next to these absolutely enormous ships.

The crossing was pretty much straightforward and we arrived at Port Olimpic at around 0730 and got the boat tied up next to the hoist jetty. Cutting a long story short, the boat was lifted around 1000, then another hour or so (well it felt like that) doing all the associated paperwork. Pete’s better half Debbie had arrived and she kindly organised a hotel room for me while all this was going on. They dropped me off at the hotel, where I got cleaned up and slept deeply until we all went our for a lovely meal in a Uruguayan steak restaurant (what else with Pete being a meatasaurus!) and then a wander down to the beach at Castelldefels eating ice cream…..lovely.

Being the professional he is, Pete was straight onto the job first thing next morning, and kept me updated with photos. 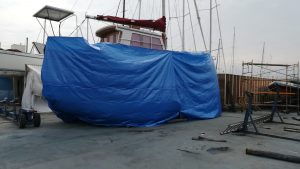 Meanwhile I organised a midday flight back to Mallorca.

It was good to have a wee trip again in Sundog as she hasn’t been past the Formentor Lighthouse for a couple of years ……and even better, doing the crossing with such a good friend. Thanks Pete 😉