Since arriving on the island we have been busy doing the last of the “wee jobs” that needed doing in the apartment.

When we first purchased the property we thought we could get away without fitting air con because when the front and back doors are open there is a good draught through the property. How wrong did we get that one!!
The temperature at times this year has been chasing 40c and in the evening it seems to get even warmer. We stuck this out for a couple of months, but then decided to check out air con makes models etc……this is a challenge in itself! Coming from Scotland we know a lot about fires, but “he haw” about air con.

We shortlisted some companies to come and give us an estimate for fitting the whole system from scratch. I was also keen that the exposed trunking used for all the pipes etc was kept to a minimum. Cutting a long story short we settled on a local company, and whilst not the cheapest they afforded us the most confidence.
We were keen for them to get started asap as Reyce (grandson) was coming out for a couple of weeks and then a few weeks after he went going home Aailyah (granddaughter) was coming for an extended holiday.

You can imagine our surprise when I was informed that there was shortage of air con units on the island and also with the mainland distributor. Unsure if this was true or not we checked with other companies and it was the same story. They were only in a position to fit what they had in stock on the island and these units were not what we wanted. We really wanted this fitted for our grandchildren’s forthcoming visits.

Reyce duly arrived (no air con) its hard to believe he is now 17, and we had a fantastic time during his stay. Larking about the water on the beach at Cala Muro, driving to Formentor Lighthouse which is tight twisty road with hairpins etc, and I think because he is now learning to drive at home it spooked him a little 🙂

We also were out on Sun Dog and had a fun time swimming off the boat. Reyce decided to dive off the wheelhouse roof while I was meant to catch it on video………..poor guy had to do it about ten times before I captured it properly :-)…….sorry Reyce 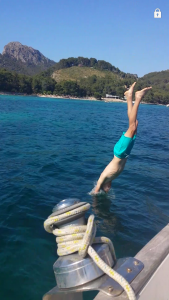 It was a great couple of weeks with my ever lasting funny moment being when Reyce was snorkelling off the boat in Formentor Bay with his head down watching all the fish, I was on the boat when the devil took hold and I threw a piece of bread which landed about three feet in front of his mask and all the fish shot straight up for it – well the combined simultaneous shriek of cursing and laughter coming out his snorkel had Sara and I in absolute stiches. 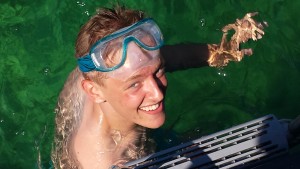 This sort of encapsulates the fun time we all had together, and as ever it all seemed to pass far too quickly. We were sad when we dropped him back off at the airport, but we did have a superb time with a lovely young man. 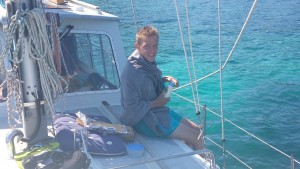 Sara flew back to Scotland for a week to spend time with Keira Brett and Aaliyah before snaffling the little one up and flying back to Mallorca with her.

As soon as we got back to Puerto Pollenca and dropped off the cases, Aaliyah wanted to paddle right around the beach with Sara, no bad thing after a flight so off they toddled. 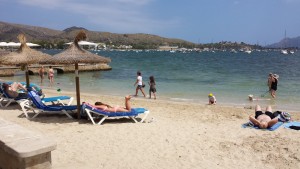 ….and here she is looking “tres cool” in the apartment. Amazing how time flies – it only seems a short time ago that she was born. But I’m certain every parent/grandparent have said and felt the same. 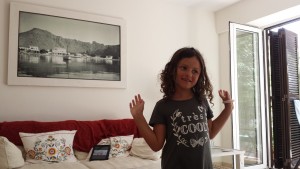 We tried many things that we thought would have been of interest to her, but no, the beach every day was what she wanted. Therefore one doesn’t have to be a rocket scientist to figure out where our days were spent. We even took her round to Cala Muro (our favourite beach) but from then on she didn’t want to go anywhere in the car, instead the local beach was her playground.

One day however we managed to get her to leave the beach and we went to Alcudia old town where she had a ball in and out of the shops looking for “something for her room”. I don’t think any shop was missed and Sara and Aaliyah had a great time. As for me I was wilting by the end of the afternoon 🙂 en route back to the car we passed the local Bullring, which thankfully didn’t have a fight on, but the little café was in the shade so we stopped for a juice. I managed to get Aaliyah, complete with her fan, to pose for a “Spanish Style” photo. 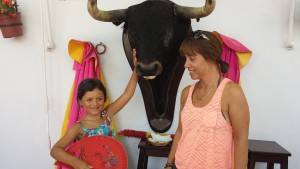 I could witter on for ever about her stay, but suffice to say that it was simply a delight having her here and watching her being so happy was lovely. She was “adopted” by the lady in the Bakery after asking for the food we wanted in Spanish, and then Aaliyah in turn adopted a friend of ours called Fran. Now Fran works evenings in his nephews restaurant called Nico’s. I’ll give you one guess where she wanted to dine when we were out at night…….yep you didn’t need more than one attempt 🙂 He is a really nice helpful guy and I guess she sensed the same because she spontaneously gave him a big hug on her last night.

I wont mention the ice cream shack here Aaliyah, as mummy and daddy might read about it and we would want them to know about the delicious ice creams…………so its Nana, Papa and Aaliyah’s secret…shhhhh!!

All too soon it seemed Brett was flying out to collect Aaliyah, but as we had about three weeks of her to ourselves we couldn’t really complain.