I have been out in Barcelona with my mate Ian getting Sun Dog lifted out and prepared for a full hull Survey as requested by the insurance company. We also had our own “job list” to work through subject to weather.

The survey was conducted by Nick Adam of Adam Marine and a most thorough job he conducted. He was into every nook and cranny in the boat, and I’m delighted to report that his conclusion is that Sun Dog is in pretty good shape for her year – a very reassuring endorsement from someone of his experience.

One point worthy of note, was that Nick could see a rusty bolt while checking out a hidden corner of the boat. Now I went to get myself into this tight space to look at the bolt and its embarrassing to state that despite Nick’s patience, I consistently failed to see it for myself. However I trusted him in that he could see it on the outboard end of the horizontal metal bracket holding two pulleys for the steering cables.

With this being a safety critical area I emptied the locker and lifted the sole plate to expose this bracket. At this point I could clearly see the rusty head of a coach bolt going through the wooden plate and holding the outboard end of the bracket. Out came the spanners and we stripped out the coach bolt – and once out – to my horror, I could see that it had rusted away to about half it’s original diameter – see photo below. In my mind this made the cost of employing Nicks services more than worthwhile, as no doubt it would have ultimately failed. And as we all know Murphy’s law dictates this would have happened at the most inopportune moment…..nice one Nick. 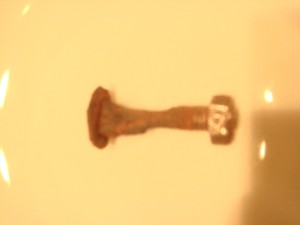 (Update on Survey: After submitting the survey report to the Insurance Company when I got back home, they came back to me after a week stating they were happy to keep the boat covered, after, and I quote……. “such a good report”

Other key work conducted was stripping away interior woodwork to get access to two of the stanchions that were loose, and after a bit of a fight managed to get full purchase on them to tighten them properly.

We also lifted all the floorboards to seal up the holes cut for the Ultra Sonic anti fouling cables to protect the cable from chaffing on the holes. This was done with silicone sealant from both sides and has worked rather well.

Ian had manufactured a neat chart storage solution on the boat a few years ago, but as this was behind the fridge there was a fair amount of heat being generated but trapped by this unit. Solution was to strip out his construction and with a hole cutter, cut out a number of holes to facilitate air flow. Only when we are next on board for a while will we know how effective this will be, but I am sure it will help immensely

We had the boat lifted on the Monday to be cleaned ready for the surveyor on the Tuesday. The boat was scheduled to be lifted back into the water at mid-day on Friday which left two and a half days to wash, clean scrape and sand down the hull. In this time we also had to source anti-fouling and all the associated gear required – a big thank you is due to Pete from Paradocks Painting and the staff at Pinmar supplies.

Thankfully the weather God’s played ball and we managed to have all this completed in time, and just had to touch up the bits missed by the retaining blocks, which were easy to do once the boat was back in the slings. The staff at the club were really good allowing the boat to stay in the slings until the touched up areas were dry.

The boat was then duly lowered back into the water, and when I went to fire up the engine I found out the batteries were flat. My fault entirely for having the switch set to both, instead of isolating the start battery……lesson learned!!

This necessitated a charge up from shore power and once back in our berth a comprehensive checking of the batteries. Upshot being the two large Varta domestic batteries are no longer holding a charge and need to be replaced. As they have lasted at least ten years I don’t suppose we can really grumble to much.

As we had run out of time, our friend Nico is helping us source replacements from a supplier in the Barcelona area. As anyone running a boat in Spain knows the prices for about everything in Spain always seems to be much more expensive than the UK, so we need to get them for the best price possible. Carriage costs from the UK would be prohibitive due to their combined weight.

Our final Brucie Bonus from the Gods’ was that the Jabsco toilet pump started leaking, and whilst I had a repair kit on board this would have necessitated the removal of the pump and a complete strip down and rebuild. I decided to leave this strip down for another day and ran (well walked briskly) over to the chandlers to pick up a new pump which was easily fitted.

There are times when owning a boat seems to be a constant and ever changing set of challenges………….but there again I won’t be the first one to have made that statement!!!

Previous entries on this under “Categories”

When the boat was lifted out for survey I was pleased to note that there was virtually no weed at all on the underside, but there was a fair degree of barnacle (?) type growths on the hull as can be seen in the following photos. Now my initial reaction was one of disappointment, but to be fair there are a number of factors still to be taken in consideration before I make final judgement on the effectiveness of this piece of kit. 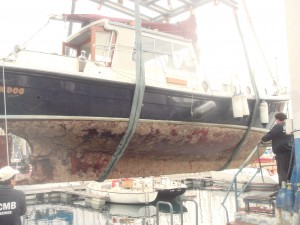 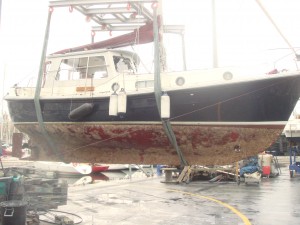 (1) The boat is sitting in a deep harbour and not moving very much at the moment, therefore rendering the anti fouling on the hull a wee bit ineffective as there is no water regularly flowing over the hull. Remember also in the Med there is not much tidal flow compared to the UK!

(2) The underside wasn’t coated with fresh anti fouling when last lifted and cleaned in May 2013. Sun Dog was last antifouled in January 2012.

(3) Now I don’t know for sure if this next point is valid, but I have had issues with battery power, and cutting a long story short, I discovered on this trip that the domestic bank of batteries are no longer holding a charge, and therefore perhaps the Ultra Sonic kit has not been delivering its full effect, as it cuts out when the voltage drops to save draining the battery completely.