We had a pretty sizeable blow come into Puerto Pollenca which its fair to say created a bit of mayhem. 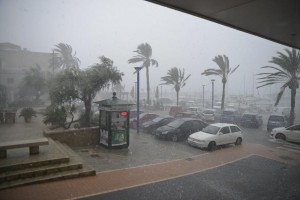 There were about three or four boats that detached from their mooring and were washed onto the rocks or ashore. There were also a couple of others that sunk whilst tied up at the port……..real crying shame.

This chap was pretty lucky as his yacht missed the rocks and wasn’t really damaged when it came ashore and it was safely re launched a couple of days later.

The local authority was busy on the beach for a few days trying to dig out the sun loungers and get the sand levelled out again. 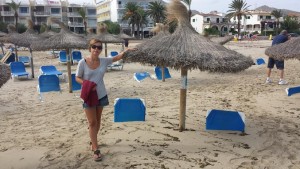 I’m also pleased to state that Sun Dog was OK, and we are both happy that we invested in good ground tackle earlier in the year – worth the expense to have “piece of mind.”

About a week after Reyce went home our friend Marcus came out for a quick break (no air con) and it was great catching up with him again, and we had a few trips out. These included the Caves of Drach. Marcus also spent a bit of time getting back into windsurfing from the beach at Puerto Pollensa, and it all must have come back quickly as he was soon shooting across the bay.

The funniest day we had was when we drove down the mountain road to Sa Colabra to visit the Torrent de Pareis The road down is quite hairy and the Lord himself knows what one would do if you came across a coach going the opposite way……….it would be pretty tight at certain places! Lots of whoops and laughter on the way down this road, and holding of breath on the way back up 🙂 Once we reached the top we headed over to Soller for the rest of the day before heading back to Puerto Pollensa.

The day we visited Alcudia Old Town we also had lunch at Cocodrilo Restaurant which has outstandingly fresh seafood and a view to die for from the restaurant tables through the back…….yum !!

On his last day we went to Ses Torres at Ariany and had a fantastic long lazy lunch which he thoroughly enjoyed before taking him back to the airport.